Well friends…we finally did it. We finally traded in my car for a, dare I even say the word…VAN.

My dream (reasonably priced) car. My beautiful pearl white, Honda Civic EX-L. My sweet little Ivory 2.0, as I lovingly refer to her. She’s only been with me for about 2 years and those 2 years were far too short.

The last piece of my pre-mom life has come to an end and I am officially “that mom.”

To say I’m not sad would be a lie. I’ve already done my time in a van. Those early high school years of first learning how to drive, my grandfather (or as I call him, G) would take me out to the backroads of Cowpens, SC in his Dodge Caravan and teach me all the ins and outs of being on the road. G was a race car driver back in the day, so he probably wasn’t the best choice to be teaching a 15 year old how to drive…with a lead foot, but those are some of the best memories I have with him. G would pick my sister and me up from school every day, so once I was officially licensed and before I got my own car, the Dodge was mine to drive to school and back and really whenever I needed it. And goodness I hated that thing. I will say though, we’re talking back in the day before van’s really had all the exciting perks they do now. (Did I just call a van exciting?! Who even am I?)

I have NEVER wanted a van, never even wanted an SUV. I’m a small car kind of gal. I want to be low to the ground and take up the least amount of space on the road as possible. In fact, if I could fit my whole family and all of our necessities into a Smart Car, I would.

When I was in the market for my first car, I went back and forth for several weeks between a Volkswagen Beetle and a Honda Civic. When a cream Beetle became available at a steal, we jumped and let me tell you, my whole family hated that car. Y’all, that car was good until we drove it off the lot. It gave us more problems than I can even count and after 2 or 3 years, I traded it in for the car I should’ve gotten to begin with. The original Ivory was a 2 door Civic coupe and man did I love that car. If I could’ve seen the future when I bought her, I probably would’ve looked for a 4 door sedan because carseats DO NOT fit well in a coupe. After having Monroe, we put up with the 2 door situation for about a year before finding Ivory 2.0. It was a sad day pulling off the lot leaving OG Ivory behind, she was the first car I purchased on my own and was my very first ‘adult purchase.’ I fell in love with 2.0 really quickly, she was just like the original only better. After having Mikaela, we knew we would probably have to upgrade yet again and this time we were almost certain we were headed towards the van life. Just the thought made my gut turn. We found a few online but never followed through. As much as I knew we needed that van space, I was a little happy on the inside because it meant one more day in my car. 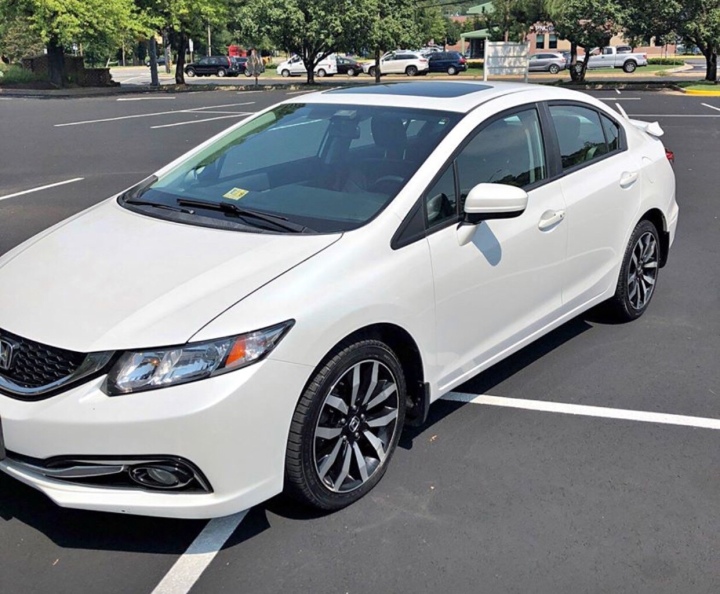 The day we had my car detailed and listed it on Facebook marketplace I was a mess. It was time and because it was now so clean, the kids and I were booted from my perfect car into David’s CR-V. Y’all, I hate driving David’s car…like really hate it but we couldn’t risk the 10lbs of the goldfish crumbs landing themselves back in my car seats. Anytime I had to run to the grocery store by myself, I was giddy. So dumb, I know, but that was one more trip in my car and each trip could be my last.

Every single time we go to buy a new car, things just fall right into place. God is in control of it all. We found what we thought would be the perfect van at a small privately owned dealership. Test drove it and aside from it’s blue color and lack of dvd player, it was perfect. We like white Honda’s; I’m on my second white Civic and David’s on his second white CR-V. So superficial but we really wanted a white van if we decided to make the trade. Long story short, the owner was awful and the deal fell through.

God was in control.

A week later, we had some out of town guests. The car came up in conversation and they seemed really interested. They came back with an offer 2 days later and my car was officially sold. We spent that evening searching for that perfect van, if there even is such a thing. We stumbled upon a white Honda Odyssey in our price range. It had all of the upgrades that my civic had and more; back-up cam, bluetooth, side cam, push to start, dvd player, lane watch, etc. Y’all, it seemed too good to be true but we went to check it out anyway. Monroe was sold the second she saw that there was a TV in the car. She was stoked and watched The Little Mermaid the whole test drive. We signed the papers and walked away that night as new van owners. We left wayyyy past closing so they kept it to detail it and it was delivered straight to my front door Monday afternoon.

She really is pretty and has every single thing we were needing AND wanting. I say again, God was in control. I took her for a spin after she arrived. Any guesses on the first place we went?

I rolled up in my mom van, two kids in tow, a messy bun and (of course) yoga pants. I am officially that mom and, honestly, I’m not even mad. She is such a smooth ride and y’all, this DVD player is a game changer. As sad as I am to lose my beautiful Civic, this is just the stage of life we’re in.

I have a van because I have two happy, healthy, beautiful daughters and that is the best reason I could ever have.

The van will make things so much easier on me when I’m lugging the kids along and the extra space (and did I mention DVD player? HA) will make road trips so much more comfortable. 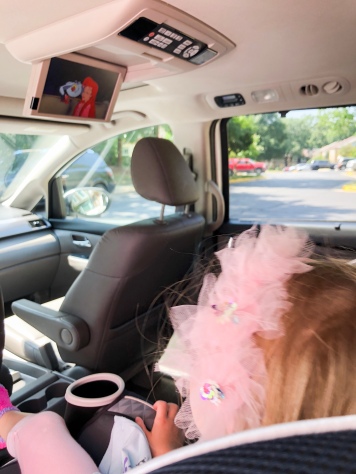 My small car days are over for now, but I made David promise me something…the very second that the girls are out of carseats and into booster seats, I get a brand new Civic.

I can’t wait to see all that happens between now and then. The next 6 years with 2 growing girls is sure to be a fun ride antd I can’t wait to enjoy every second of it in the new van.

She doesn’t have a name yet. I have some ideas but am open for suggestions. Have a good name for my new mom ride? Let me know!

This site uses Akismet to reduce spam. Learn how your comment data is processed.

Happy birthday to the one thats been by my side through all of life’s craziest stages. We’ve experienced so much together. From the birth of our children to the deaths of family members just days apart— you’ve been my person through it all. Thankful for you today and everyday. I love you so much, best friend. ❤️
URGENT: what’s your go-to Starbucks order? ☕️ Okay— soooo maybe not urgent. BUT when it’s not “holiday drink” season I literally have no idea what to get. Help a girl out and drop your Starbs order 👇🏼 . . . . . . http://liketk.it/2KNOO #liketkit @liketoknow.it
Real queens fix each other’s crowns. 👑 and as cliché as that sounds, it’s so so true. THANK YOU to every single queen I’ve met here through IG. You sweet queens that show up day in and day out and support me as I share my life here on social media. Social media can be such a destructive place, but when you have the kind of gals that I have on this platform surrounding me, it’s nothing but love and support. So thank you for being here— through the good days and the bad days, the raw and the real, when my brows are #onfleek and when they’re on the #strugglebus and through the daily highs and the lows of #momlife. I’m just feeling extra grateful for this community today. ❤️🥰 [comment below a reason why you follow me and tag a friend. One commenter and their tagged friend will win a “happy mail” package from me ❤️]
K’s little pose and Roe’s huge cheese. I can’t. 😍 #thesundayjones
Okay how do we feel about this “sweat pants/bike shorts and heels” trend that @kimkardashian started? I thought it was totally weird at first buuuuuut then I put on this outfit and I was FEEL 👏🏼 ING 👏🏼 MY 👏🏼 SELF 👏🏼👏🏼👏🏼 This @common.assembly waffle knit was the perfect top for this comfy cute outfit. 🙌🏼🥰
Pink nails. Pink hair. All pink err-thang. 💕 Ya girl got some cuuuuute burgundy/pink hair happening. [#ad] I’ve been dying to try @overtonecolor for close to 3 years now so I was so excited when they came out with their coloring conditioners #forbrownforachange 👏🏼👏🏼👏🏼 check out my stories to see how easy the process was and swipe to see my results! #oVertonepartner #oVertonecolor #healthycolor
%d bloggers like this: